The Duchess of Cambridge has selected some of her favourite photographs that best capture the ‘resilience, bravery and kindness’ of Britons caught in the coronavirus crisis.

She has joined forces with the National Portrait Gallery to launch a community photography project designed to catch the ‘spirit, mood, hopes and fears’ of the nation.

The project, titled Hold Still, showcases the lives of those who have put everything on hold to help protect our NHS – and the reality of everyday life on the frontline for our helpers and heroes.

Kate, 38, who spearheaded the campaign, is a patron of the National Portrait Gallery and a keen amateur photographer, aims to capture a snapshot of the UK at this time, with the help of the nation.

The Duchess will personally curate 100 photographs for the Hold Still exhibition.

She said she had been ‘struck’ by the many ‘incredible’ images seen already, ‘which have given us an insight into the experiences and stories of people – some desperately sad images showing the human tragedy of this pandemic’.

Others, she said, had been more ‘uplifting’. Among her favourites are a five-year-old girl called Eaddee who wears a painted rainbow face for the NHS, 79-year-old Jack Dodsley dancing with a health worker at Newfield Nursing Home in Sheffield, grandparents greeting their grandchildren from the other side of a window, and Nottingham ICU nurse Aimee Goold.

The community photography project comes after the UK became the first country in Europe to record 30,000 deaths from the coronavirus yesterday, announcing 649 more victims. Now at a total of 30,076 dead because of the COVID-19 outbreak, the UK has hit the grim milestone before either Spain or Italy, which were widely considered to have the worst outbreaks in Europe. Only the US has recorded more fatalities, with 72,000.

People from across the UK are invited to submit a photographic portrait which they have taken during these extraordinary times for the community project. 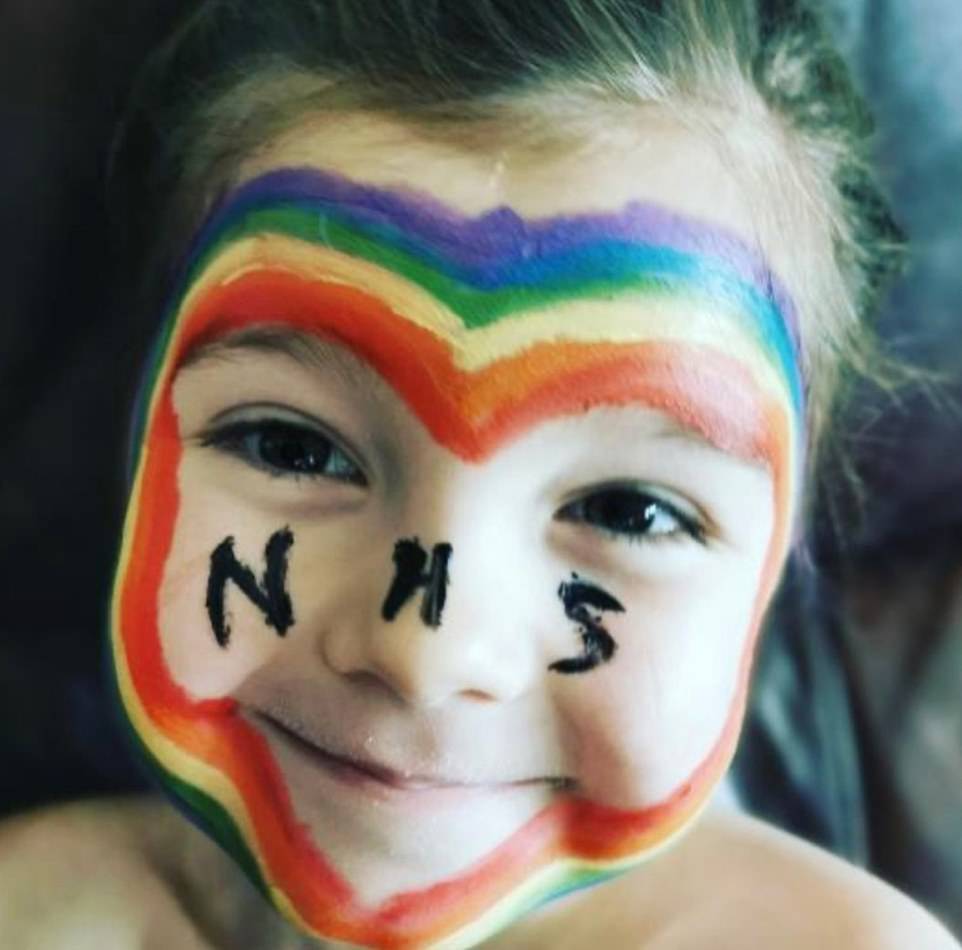 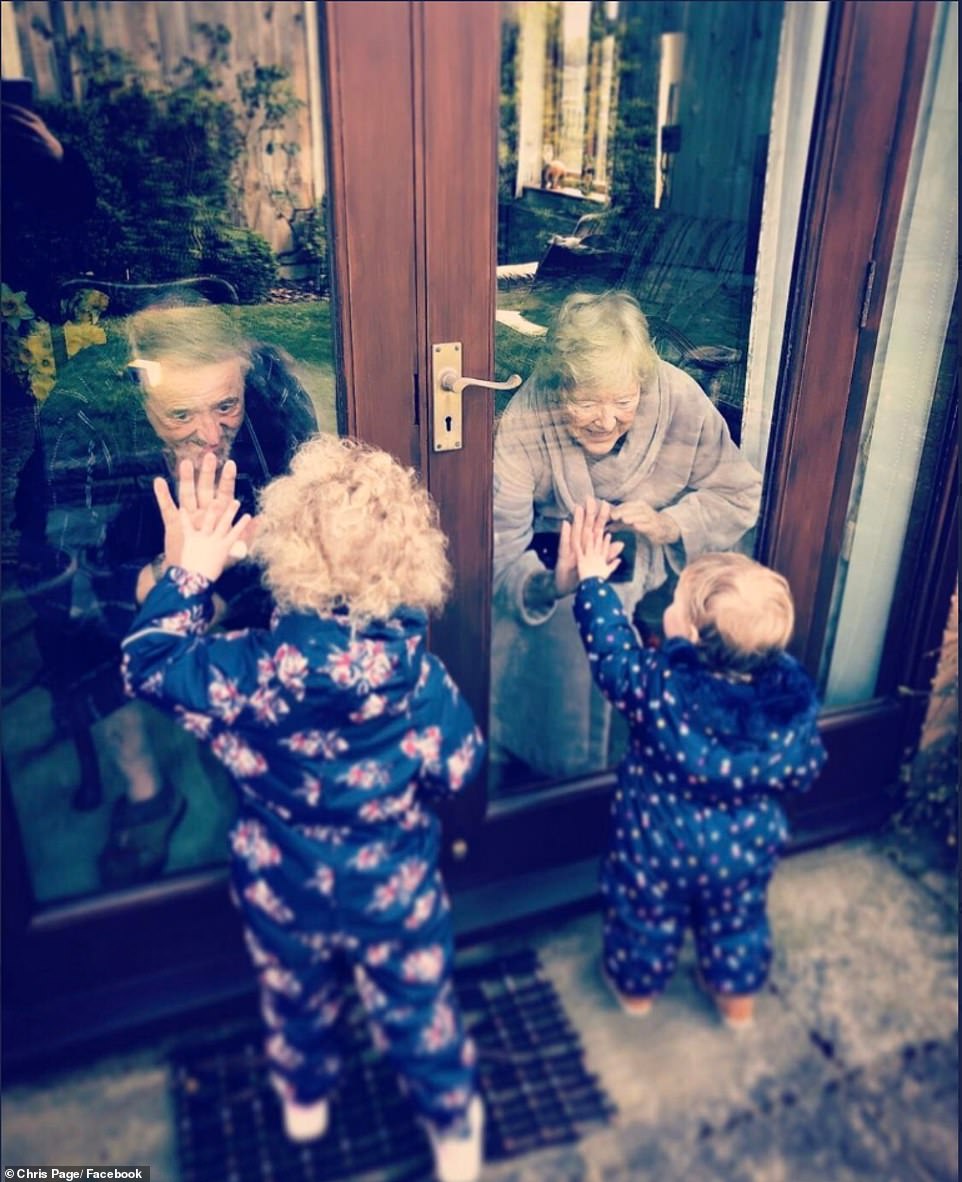 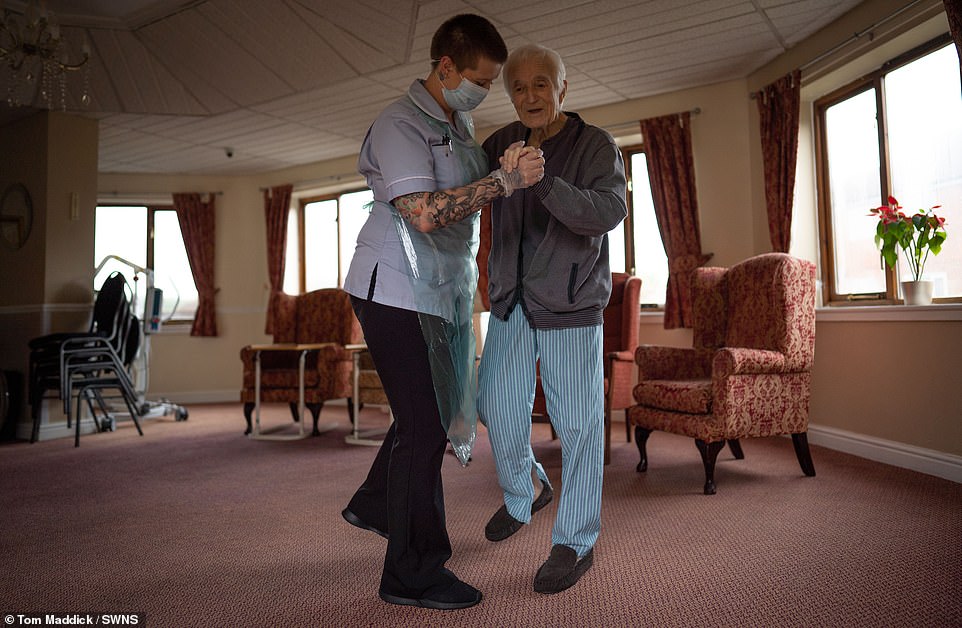 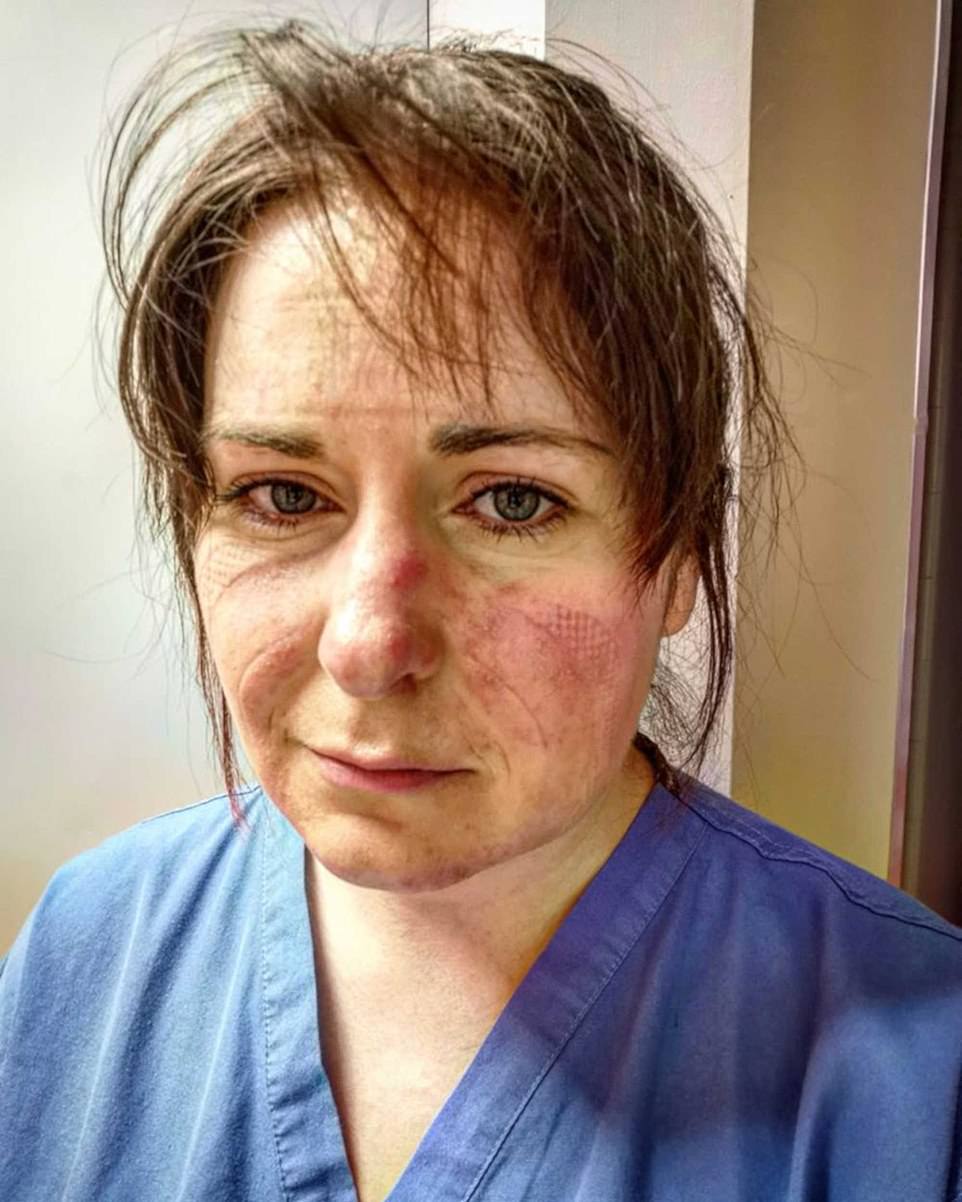 ICU nurse Aimee Goold posted a heartbreaking image of her tired and scared face, pleading with people to stay home 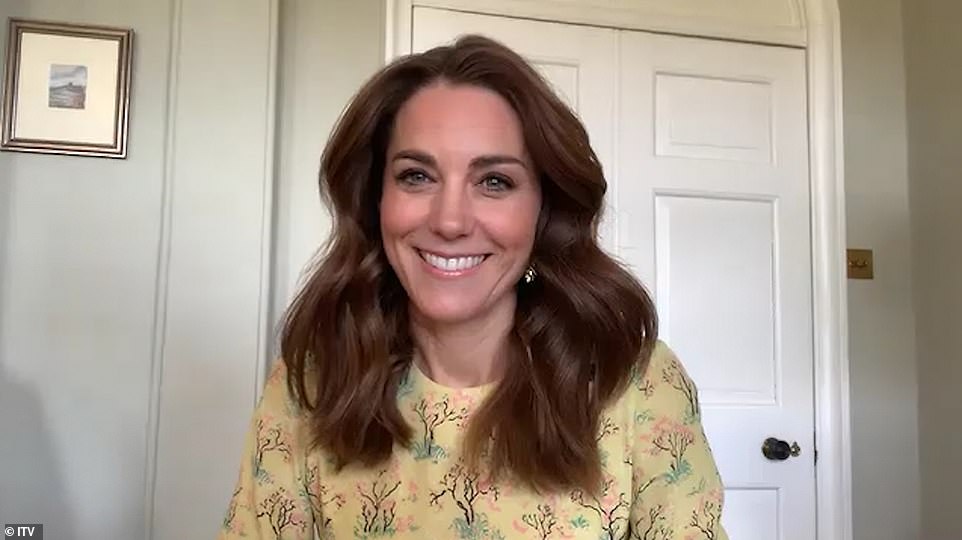 The Duchess of Cambridge has joined forces with the National Portrait Gallery to launch a community photography project designed to capture the ‘spirit, mood, hopes and fears’ of the nation as it continues to battle coronavirus. Pictured during an interview, which will be broadcast on ITV’s This Morning today

Participants are also encouraged to provide a short written submission to outline the experiences and emotions of those depicted in their photograph.

Hold Still is completely free, open to all ages and abilities, and will focus on three core themes – ‘Helpers and Heroes’, ‘Your New Normal’ and ‘Acts of Kindness’.

The idea is to create a unique photographic portrait of the people of our nation in lockdown as we ‘hold still’ for the good of others, and celebrate those who have continued so we can stay safe.

It will reflect resilience and bravery, humour and sadness, creativity and kindness, and human tragedy and hope.

Hold Still will also act as a reminder of the significance of human connection in times of adversity, and that although we were physically apart, as a community and nation, we all faced and rose to the challenge together.

The project – spearheaded by Kate, 38, who is patron of the National Portrait Gallery and a keen amateur photographer – is called Hold Still, and aims to capture a snapshot of the UK at this time, with the help of the nation

Kate has taken part in an interview, which will be broadcast on ITV’s This Morning today, to speak about the project and her motivations for utilising photography to capture a portrait of a nation.

The Duchess and her love for the lens: How Kate Middleton’s university studies led her to break Royal tradition and take her own family snaps

As the Duchess of Cambridge releases new photographs to mark Holocaust Memorial Day, it’s evident that her passion for the lens has led her to create some stunning pieces.

Kate Middleton has a clear love for photography and her first major project had been for her parents for their party planning business, Party Pieces in 2008 when she was commissioned to do some work for them.

Kate studied art history at St Andrews which included modules such as Histories of Photography (1835 – 1905). She then went on to produce her thesis on photography of children.

She then went on to break royal tradition, straying away from the favoured royal photographers and herself releasing snaps of her children, including pictures of Prince George before his first day in nursery.

Since then she has gone on to share a host of photos of her children via the Kensington Palace Instagram page. It is also believed that she had taken her own photos for the Queen’s 90th birthday celebrations.

In it, she wore a stunning yellow bracelet-sleeve silk dress by British brand Raey, featuring a pink and green tree print. The dress is currently on sale on Matches Fashion for £148, reduced from £495.

Kate wore her brunette locks in loose waves around her shoulders and opted for her signature natural make-up, with brown eyeshadow and a nude lip.

On the launch of Hold Still, The Duchess said: ‘We’ve all been struck by some of the incredible images we’ve seen which have given us an insight into the experiences and stories of people across the country.

‘Some desperately sad images showing the human tragedy of this pandemic and other uplifting pictures showing people coming together to support those more vulnerable.

‘Hold Still aims to capture a portrait of the nation, the spirit of the nation, what everyone is going through at this time. Photographs reflecting resilience, bravery, kindness – all those things that people are experiencing.’

Submissions for Hold Still can be made from today (May 7) via www.npg.org.uk.

The closing date will be June 18, 2020. One hundred shortlisted portraits will then feature in a gallery without walls – a one of a kind digital exhibition open to all. A selection of images will also be shown across the UK later in the year.

The images can be captured on phones or cameras, and each image will be assessed on the emotion and experience it conveys rather than its photographic quality or technical expertise.

For 164 years, the National Portrait Gallery has existed to tell the stories of the people of Great Britain through the medium of portraits. In these unprecedented times, it is now more important than ever that we find ways to document and share our individual and collective stories of an experience which has impacted everybody’s lives in a multitude of ways.

Speaking about Hold Still, Nicholas Cullinan, director of the National Portrait Gallery London said: ‘Even if we are alone, we can all create something together.

‘We are honoured to partner with the Duchess of Cambridge on the Hold Still project, which will provide an inclusive perspective on, and an important historical record of, these unprecedented times, expressed through the faces of the nation. 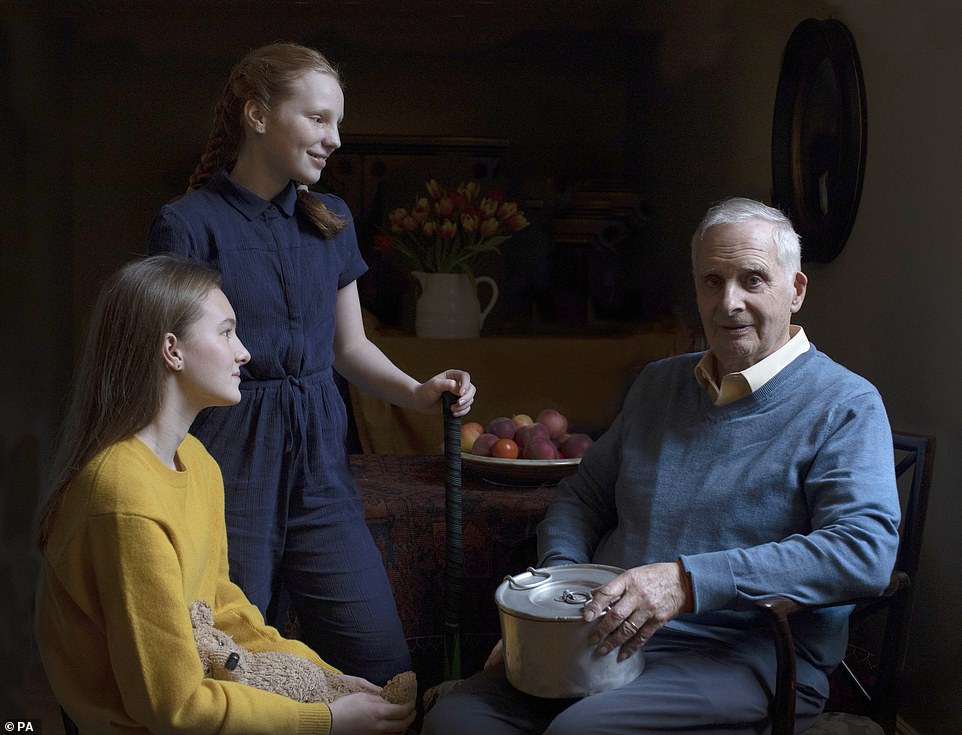 In January, Kate took photographs of two Holocaust survivors with their grandchildren as part of the commemorations for the 75th anniversary of the end of the Holocaust. Steven Frank, 84, with his two granddaughters Maggie, 15, and Trixie, 13, was photographed holding a pan his mother used as a boy 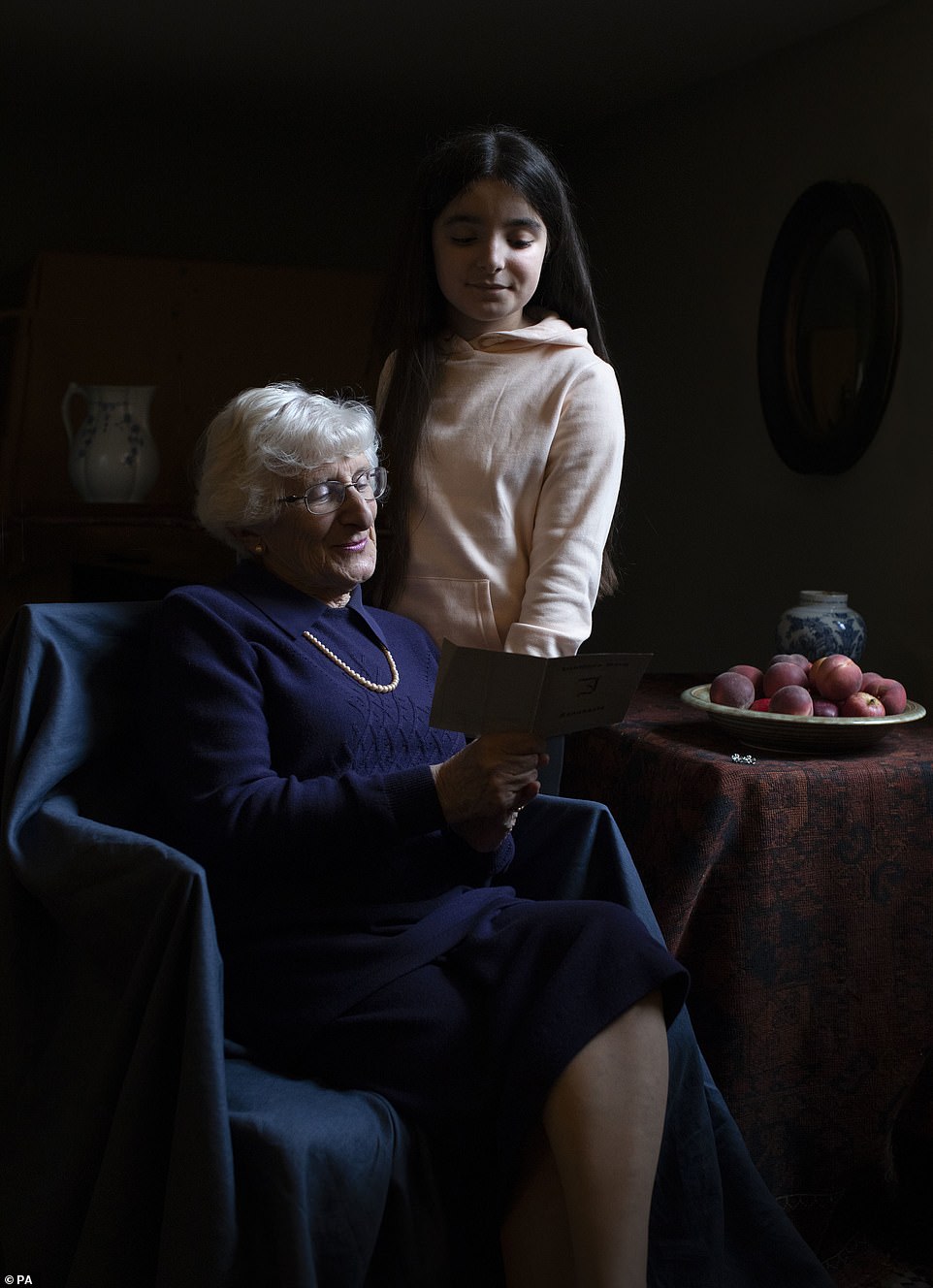 Kate invited Steven Frank, 84 and Yvonne Bernstein, 82, pictured, into her home that she shares with Prince William and her family in order to create the images which were inspired by Dutch artist Vermeer

‘The National Portrait Gallery reflects the history of Britain through the personal stories of the people who have helped to shape it. We are now inviting each and every person, across every city, town, village and home in the UK, to share their portraits with us in this unique collective endeavour.’

The Duchess of Cambridge has been Patron of the National Portrait Gallery since 2012, and has a lifetime honorary membership of the Royal Photographic Society. She has a longstanding interest in photography and its power to capture emotions and stories.

In January, Kate took photographs of two Holocaust survivors with their grandchildren as part of the commemorations for the 75th anniversary of the end of the Holocaust.

Kate invited Steven Frank, 84 and Yvonne Bernstein, 82 into her home that she shares with Prince William and her family in order to create the images which were inspired by Dutch artist Vermeer. 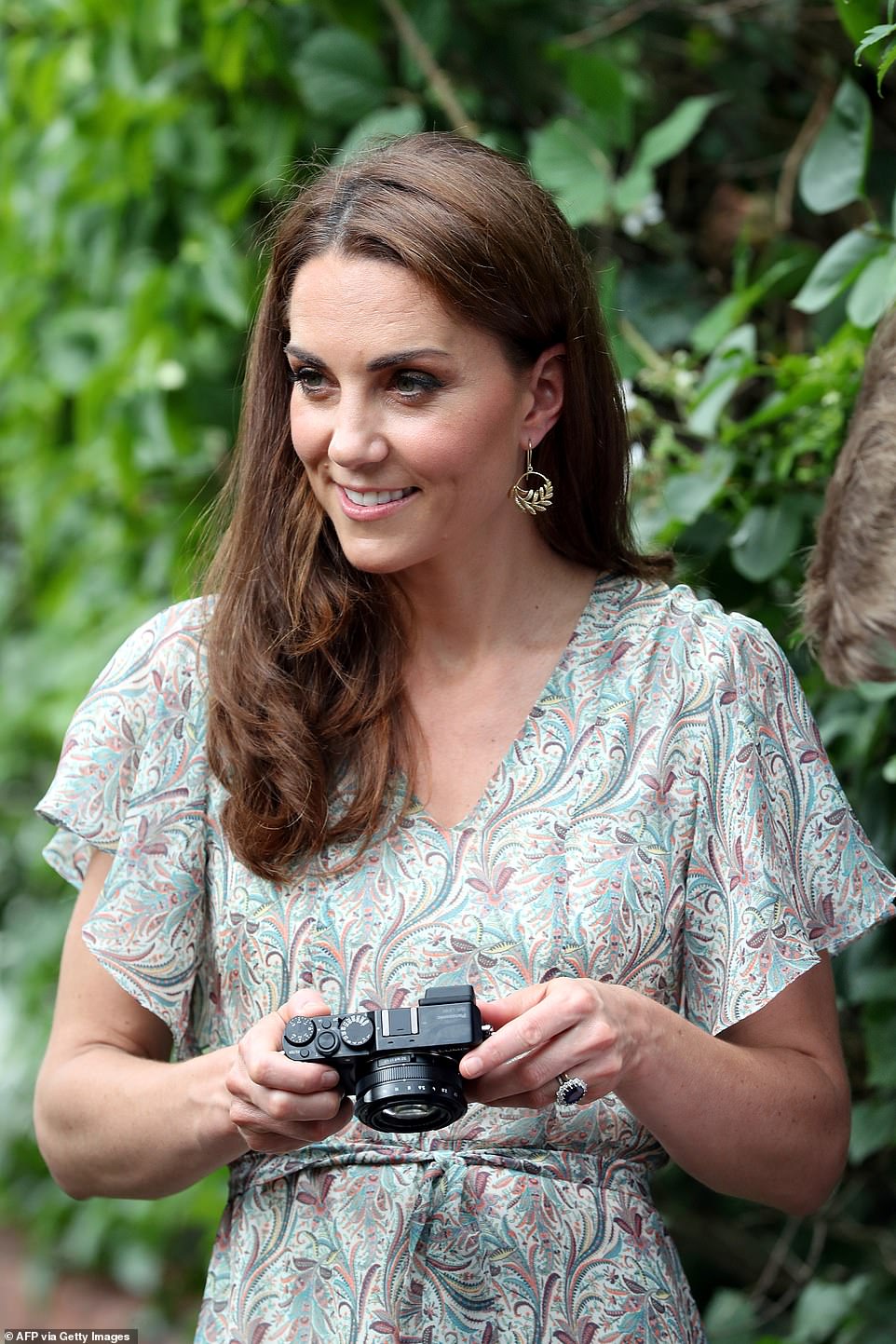 The Duchess of Cambridge (pictured), who is a patron of the Royal Photographic Society, took the photographs which were released to mark Holocaust Memorial Day and will be part of an exhibition later this year 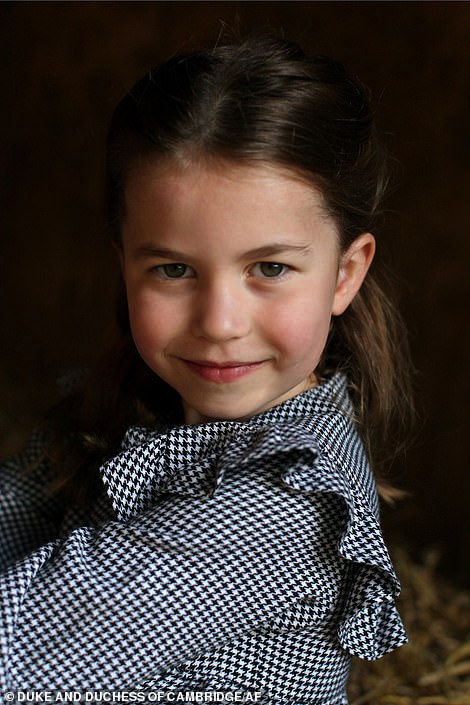 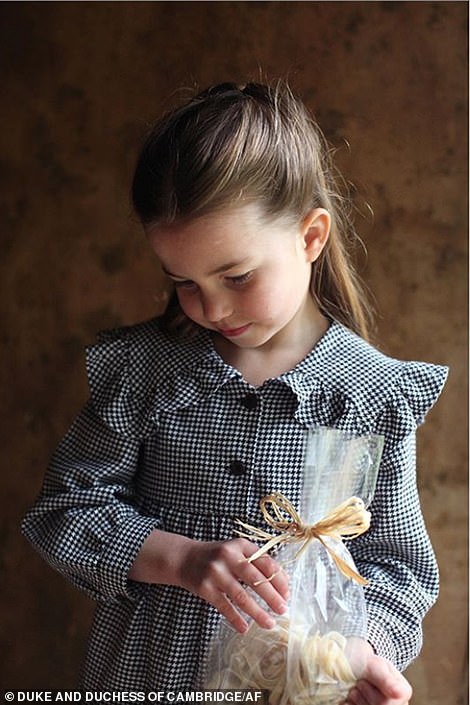 The Duchess of Cambridge has a longstanding interest in photography and its power to capture emotions and stories, and often shares images she has taken of her children. Pictured: Photographs of Princess Charlotte, taken by Kate to mark her fifth birthday last week

One photography expert told MailOnline that it was clear Kate had been influenced by ‘Vermeer’s study of light’.

The Duchess, who said their stories would ‘stay with her forever’, encouraged her subjects to hold ‘deeply personal’ items that reflected their time at Nazi camps. 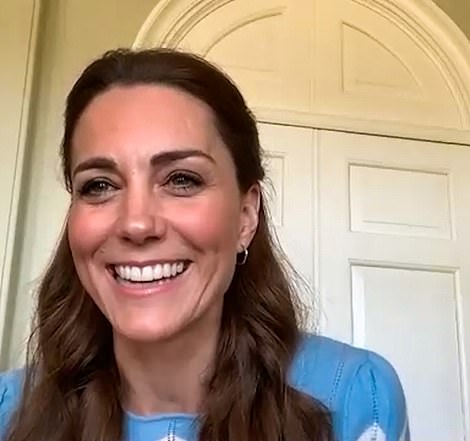 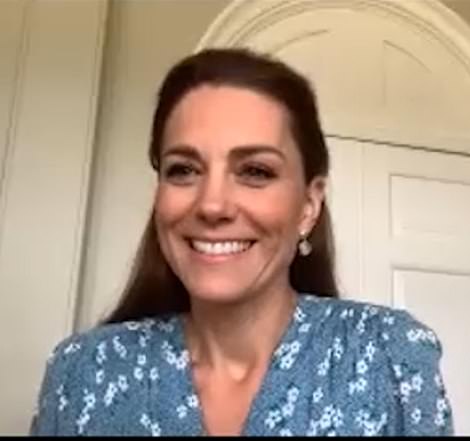 Both Kate and Prince William, 37, have continued to support charities and organisations close to their hearts despite the UK’s lockdown amid the coronavirus pandemic

Both Kate and Prince William, 37, have continued to support charities and organisations close to their hearts despite the UK’s lockdown amid the coronavirus pandemic.

The royal couple have been using video calls to show their support, chatting about mental health, schools and the NHS, and clapping for the NHS every Thursday while isolating at Anmer Hall, their home in Norfolk.

Last week the Duchess paid a ‘morale-boosting’ virtual visit to a maternity unit in Kingston – where she previously spent two days on a work placement – last week, gushing her congratulations to stunned new mother Rebecca Attwood.

Rebecca, from Raynes Park in South-West London, said: ‘Having a surprise conversation with the Duchess of Cambridge after two hours’ sleep was particularly surreal.’